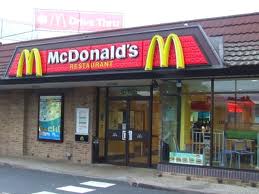 Lots of people get intense cravings for fast food, but one Georgia officer’s alleged Big Mac attack might earn him some time behind bars.

DeKalb County police Sgt. Scott Biumi is charged with felony aggravated assault after allegedly pulling a gun on a customer in the drive-thru line of an area McDonald’s on April 9. Video of the incident — captured by security cameras at the restaurant — appears to show a man in a business suit draw a gun and point it at a driver at the head of the line.

The driver, 18-year-old Ryan Mash, told NBC affiliate WIZ-TV that he had no idea the man was a police officer. According to Mash, the man accused him of “holding up the line,” then got out of his car and threatened him by sticking a gun to his neck.

“He’s like, ‘Well, you don’t know who you’re messing with … there’s some crazy people out there.’ And that’s when he pulled the gun on me, and kept on yelling at me for about thirty more seconds,” Mash told the station.

According to the Atlanta Journal-Constitution, the man identified as Biumi was driving a department-issued unmarked car and wearing a department gold star badge on his belt at the time of the incident.

“When he pulled his gun, his shirt moved up. I could see a badge,” Drake Thomson, a witness, told CBS Atlanta.

Forsyth County police traced the tag numbers and vehicle description back to the DeKalb County Police Department, then to Biumi, who was identified by witnesses and arrested Wednesday.

Forsyth County Sheriff Duane K. Piper told the Forsyth News that the incident was “shocking” and “a severe break in judgment,” since “the entire situation [apparently] evolved from [Biumi] being angry at the time it was taking for him to get his food.”