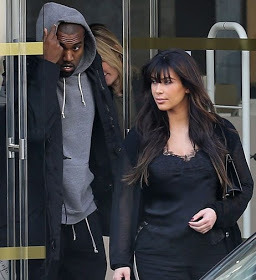 …..MediaTakeOut.com just got word this morning that a major news publication will shortly be reporting that Kim Kardashian and Kanye West have split! According to our snitch, the pub reportedly has a high level snitch who is saying that the pair has agreed to split – but are not going to announce anything until after this season of Kourtney and Kim Take Miami, and after the Kanye’s album release this summer.

The word is that he couple is scared of all the bad press that they’d receive if they split so soon. As for the “baby” . . . we’ll see what happens. We don’t necessarily believe this but here’s more. Kanye is on a self imposed exile in Paris…so while Kim is pregnant, they live in different continents. Also, on Easter Monday Kim Kardashian took an 11 hour flight to visit Kanye in Paris. They were photographed on several outings with sour faces each time. Two days later, she was back in the US.

Also, in a recent interview while promoting Tyler Perry’s Temptation, Kim talked about her pregnancy and described herself as being alone. We hope we are all just reading too much meaning into what’s going on between them.