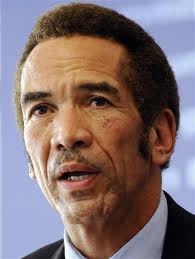 Botswana – Botswana’s President Ian Khama has received two stitches in his face after being clawed by a cheetah, a government spokesman said Monday.

The incident occurred last week at a Botswana Defence Force facility where soldiers enlisted in the battle against poaching learn about the animals they help to protect.

“He was scratched by a cheetah last week but not really attacked per se,” spokesman Jeff Ramsay told AFP.

The cheetah was being fed in an enclosure near to where Khama was standing, became excited and somehow managed to swipe a claw across the president’s face.

Khama, 60, was not admitted to hospital, but did receive treatment.

He was seen last week with a bandage on his face.

Ramsay said there were no security implications and added that because of the minor nature of the injury the government had initially decided not to issue a public statement.

Cheetahs, the fastest land mammals, are one of the few large cats not to have fully retractable claws. Far from being razor sharp, the claws are more like a dog’s than a lion’s.

A 2007 study by a conservation group counted around 1,700 cheetahs in Botswana, a southern African country famed for wildlife and its national parks which include swathes of the Kalahari desert and the Okavango Delta.

Khama, a former lieutenant general who was trained at the Royal Military Academy at Sandhurst, England, and has been in power for five years, is known as something of outdoorsman. He is better known for his patronage of conservation organizations rather than daredevil antics like his Russian counterpart Vladimir Putin, who was once photographed with a tiger.

The Botswana Defence Force Animal Awareness Park, which was created in 1989 when Khama was head of the military, is home to at least one lion, crocodile, snake, hyena, leopard, zebra and a vervet monkey in addition to cheetahs.