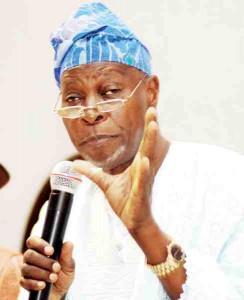 Falae, who spoke with reporters in Akure, the Ondo State capital, said granting amnesty to people whose identities remain unknown is absurd.

Falae, urged Northern leaders promoting amnesty for members of the sect to justify their position as according to him: “Amnesty is granted to people who have shown remorse. In fact, we don’t know people the Northern monarchs are asking the federal government to grant amnesty.

“What are the grievances of the members of the Boko Haram sect? Until we know their grievances, we don’t know whether it has been addressed? We don’t know if granting amnesty will finally put an end to the violence.

“I have no problem granting amnesty to members of the Boko Haram but the amnesty must be able to bring about the desired peace in the Northern part of the country. In the present situation, it will be a misplaced priority,” Falae said.