Home Metro News Rehabilitation of Railway from Port Harcourt to Maiduguri to be Completed before...
Facebook
Twitter
WhatsApp 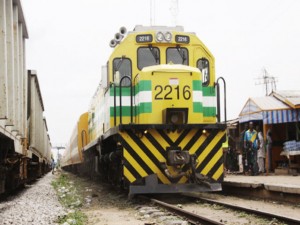 The Federal Government has assured Nigerians of its commitment to complete the rehabilitation of the Eastern railway corridor from Port Harcourt to Maiduguri, within the year.

This assurance was made known in a statement issued in Abuja by Mrs Yetunde Sonaike, Deputy Director, Press and Public Relations, in the Ministry of Transport. According to the statement, transport minister, Mr Idris Umar, gave the assurance when he received the governors of Kogi and Anambra States, Idris Wada and Peter Obi in his office.

The statement said that the governors were at the ministry to solicit the inclusion of Onitsha and Ayangba in the 25years railway development master plan aimed at transforming the transport sector. The statement said that the master plan was not sacrosanct in principle and as such technical experts in the ministry would look into the request of the governors as soon as possible.

However, the governors commended the ministry on the successful rehabilitation of the Western rail line from Lagos to Kano and looked forward to the completion of other lines.