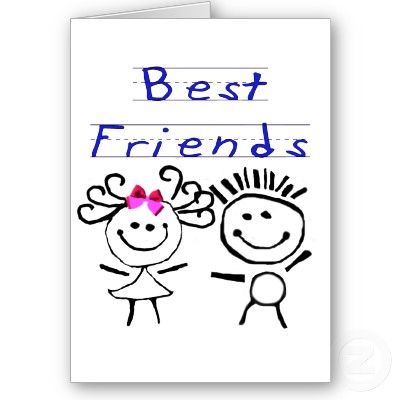 We all know that particular guy and girl who claimed they were “best friends” and ended up dating. Maybe we’ve even attempted such a “friendship” ourselves.
Is it possible for a warm blooded human male and a female of the same species to spend every waking moment together and not have any feelings whatsoever for each other? My answer is No.
The fact is, even friendships are based on attraction and feelings and because you can truly be yourself with a friend, your bond is likely to run deeper than with a lover. This is why every successful relationship must begin with friendship.

This is not to say that men and women can’t have platonic relationships. Every one needs a friend of the opposite sex. But “Best Friends”?
Most people start out on the journey to be “Best Friends” with good intentions. They genuinely believe they can achieve this goal. But somewhere along the line, things become confusing. Where do you draw the line between a female best friend and a girlfriend?
Can you really have a girl that you tell everything, even things your girlfriend doesn’t know? Is there a guy in your life you ask to come and stay with you when you’re having period pains while your boyfriend is running for his life?
My question is if you have such a person who will be there for you in the difficult times, why do you need anyone else? It would be very unfair to that girlfriend or boyfriend because all you’re giving them is the leftovers of your “best friend”
Experience has taught me that in most cases where a guy and a girl claim to be “best friends”, there are romantic feelings involved. They just don’t realize it in time. More often than not, one person is in love with the other but can’t say for fear of “losing the friendship”
In my opinion, such girl and guy friendships cause nothing but trouble, especially where other people are involved. The people who the “Best Friends” are dating most times become insecure and jealous and therefore hostile to the “Best Friend”. It almost never ends well.
However, like everything else in life, there can be no generalization in this matter. I’m sure there are guys and girls who have managed to remain best friends and nothing else.
The most important thing is to stay true to yourself. If you really just want to be that person’s friend, then make it clear and be sure you’re both on the same page. However, if u have feelings for your “best friend”, you better speak up or you’ll be stuck in the friend zone forever.