Home Lifestyle Relationships: How to Go From Being a Girlfriend to Being a Wife
Facebook
Twitter
WhatsApp 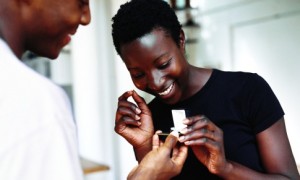 Have respect, pride and dignity for yourself. Carry yourself with honour and a sense of class. Mind your manners and present yourself as a sensible, well-grounded woman.

Not just financially, but be an independent thinker overall.  Develop a mind of your own and don’t just follow the crowd mentality.  A woman who follows the crowd will be influenced by outsiders on how she should act when married. No man will be comfortable with this. Be independent of your man and have your own life and goals and dreams and ambitions. Don’t make him your everything just because you want to marry him.

Don’t get comfortable and lazy just because you think you have a man. Don’t just think that he is going to marry you because you have been together for a few years.  Develop yourself mentally, physically and otherwise. Let him see growth and progress in your life. A real man wants to be sure that marrying him won’t be your only achievement.

If you don’t make a man’s life better while you’re dating, how will he know you’ll improve it when you’re married? Don’t just set out to take and take from your man. Let him see a positive change in his life from your being in it. Help him decorate his house and make it more like a home. Influence his sense of style and not by trying to change him or nagging about his outfits. Make a mark in his life so that he’ll want you to always be in it.

Be a Godly Woman

Being a true Godly woman is a very attractive attribute. A man knows that a true Godly woman with all the right ideas is likely to make an amazing wife. A Godly woman will be a strong support system for a man and their children. Don’t pretend however, because it will be obvious eventually that you’re a fake.

Learn From His Mother

Nobody is saying you should become and exact replica of your man’s mom but it will do you good to learn a few tricks from her.  Your man’s mother was the first woman in his life and she probably knows a lot about him that will be essential knowledge for you.

Let your man know what you expect and what you will not tolerate. If you allow your man to do just as he pleases then you’re not likely to get any respect from him and men hardly ever marry a woman they don’t respect. A man is not going to do the right thing unless he knows that if he does the wrong thing it will be met with repercussions and consequences. Don’t overdo it however because men don’t like a controlling woman either.

A man needs a woman who respects him.  If you disrespect your man, you deflate his ego and that is a threat to his manliness. A woman who disrespects a man constantly, and even in public, while still a girlfriend, is very unlikely to become a wife.

Women need love. Men need their egos boosted. Your man needs your support, your encouragement, and he needs to know that you believe in him. Remind him that he is a good man, that you are lucky to have him, that he is special and amazing. If a man knows that you’re his biggest fan as a girlfriend, it’s very likely that he’ll make you a wife.

Men are not as open about their emotions as women are but they need love too. Let your man know you love him. Show him this often with your words and through your actions. Talk sweet to your man; Hug him and hold him. Being a man is hard but with the love of a good woman, it’s so much easier.