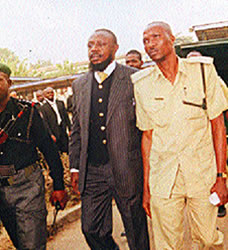 General Overseer of the Christian Praying Assembly, Chukwuemeka Ezeugo (aka Rev. King) is not giving up just yet as he has again appealed to the Supreme Court, seeking to reverse the death sentence passed on him by a Lagos High Court in Ikeja on January 11, 2007, and affirmed by the Court of Appeal, Lagos on February 1, 2013.

Justice Joseph Oyewole of the Lagos High Court had convicted and sentenced Ezeugo to death by hanging for the murder of Ann Uzoh, and attempted murder of five other devotees.

King who was arraigned on September 26, 2006 on six counts of attempted murder and murder, was said to have poured petrol on six devotees for an offence which he classified as “acts of fornication,” and set them ablaze.

One of the victims died on August 2, 2006, 11 days after the incident, as a result of the injuries she sustained from the incident.

Rev King’s lawyer Mr. Olalekan Ojo, said Wednesday, that he had filed a five-ground notice against the decision of the appellate court which refused to reverse Oyewole’s judgment.

He filed the notice of appeal at the Court of Appeal, Lagos which will, in turn, transfer the records of the appeal to the Supreme Court in Abuja. The Supreme Court is to fix a date for hearing after then.

Part of Ojo’s grounds of appeal was that the case of the Lagos State Directorate of Public Prosecutions at the trial court was “an impossible and improbable one”.

Ojo also faulted the judgment of the Court of Appeal for its refusal to reverse the death sentence because the trial judge turned down Ezeugo’s request to adduce an expert evidence on the inflammability of petrol.

He stated, “The learned Justices of the Court of Appeal were wrong in not considering the issue raised by the appellant to the effect that the case of the prosecution was an impossible and improbable one, having regards to the highly inflammable nature of petrol.

“We are saying that petrol, being an inflammable product, it is not possible for somebody to be soaked with petrol and another person who lit a match at a close range did not get hurt.

“The expert evidence was to have shown that if it was true that Rev. King ordered that quantity of petrol to be poured on the deceased, it meant the entire house would have been consumed by the resulting fire.” [Punch]