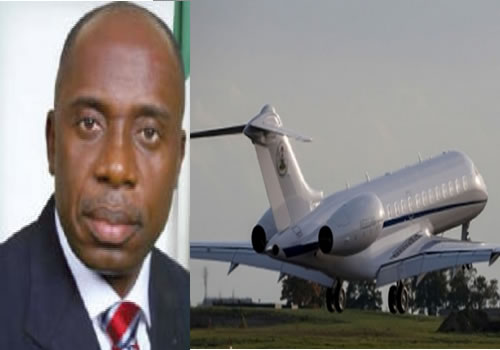 The crisis rocking the Rivers State chapter of the Peoples Democratic Party took a turn for the worse on Monday when the executive of the party issued a 48-hour ultimatum to the State Governor, Mr. Rotimi Amaechi, to explain the ownership of the aircraft that was recently banned by the Federal Government.

The state PDP also announced the suspension of 27 out of 32 members of the Rivers House of Assembly from the party for refusing to rescind their decision to suspend the Obio-Akpor Local Government Chairman, Mr. Timothy Nsirim, the vice chairman of the council and 17 councillors.

Among those suspended from the party for allegedly flouting the party’s directives are the Speaker, Mr. Otelemaba Amachree; the Deputy Speaker, Mr. Leyii Kwanee; and the House Leader, Mr. Chidi Lloyd.

The state chairman of the party – Mr Felix Obuah, while speaking with newsmen at the party secretariat in Port Harcourt, said Amaechi would face disciplinary action if he failed to comply with the ultimatum by the party over the controversial aircraft.

Obuah further warned that the PDP would not condone a situation where public funds were frittered away.

He said, “The Rivers State Government should within 48 hours explain how billions of naira from the state coffers was used to purchase the aircraft. Where is the aircraft purportedly bought with the Rivers State funds and tax payers’ money?

“From the records made available to us made available to us and the statements credited to the Acting Director General of Nigerian Civil Aviation Authority, Joyce Nkemakolam, the aircraft Bombardier D.D700, Global Express aircraft with Registration Number 5N5N65 RS purportedly bought by the Rivers State Government was false as its registration showed that it is owned by the Bank of Utah Trustee of Salt Lake City, Utah United States of America.”