Roberto Mancini Believes United’s 15 Points Lead is not a True Reflection of the Season’s Form.

“We do not deserve to be 15 points behind Manchester United. They play very well and have won many games and they deserve to stay on top, but not 15 points,” Mancini said on Friday. The Italian also attributed the lack of firepower in front of goal, the loss of Mario Balotelli and the injury to Sergio Aguero among others as the reason they may have to settle for second position in the league. At this stage last season, City already had 72 goals compared to the 55 goals they presently maintain.
“Mario scored 15 goals last season, this is the difference, the goals we did not score,” Mancini mentioned at the match conference on Friday. The tactician believe Mario’s departure to AC Milan this January has reduced their options on attack. Balotelli who often was in the bad book of the Italian, led the attack at the Old Trafford derby and scored two of the goals. “The difference is that we scored 20 goals less than last year. Only this difference,” said Mancini.
Still on the lack of firepower in front of goal Mancini continued, “We concede the same, we have the best defense, we are missing only these goals. We had a lot of injuries, we lost Sergio, we lost Mario.” On the club’s faith in the coming weeks he added, “We want second place. The next two weeks will be very hard and crucial for second place.” Mancini again conceded the title race to their neighbours; however a derby match on Monday night means the bragging right for The City of Manchester is up for grab. 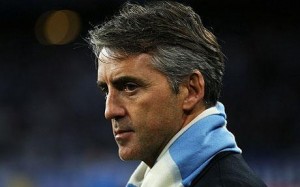 Share
Facebook
Twitter
WhatsApp
Previous articleTottenham Hotspur Winger, Gareth Bale to be out for Two Weeks.
Next articleManchester: Red or Blue (Whose City?)
- Advertisement - Ad ==> TRUTH FINALLY OUT! Discover how a young Nigerian graduate now makes a consistent 40k per week doing a legitimate online business. You too can start yours now, click here!!!

Arsenal has now moved up to 10th on the domestic league table following the four nil annihilation of Newcastle at the Emirate stadium on...
Read more

Argentine international, Paulo Dybala stepped up in the absence of 5 times Ballon D'or winner, Cristiano Ronaldo to ensure his side return provisionally to...
Read more

The MVP award for the NBA All-Star Game has been officially renamed to The Kobe Bryant MVP Award. The announcement was made on Saturday by...
Read more
- Advertisement -