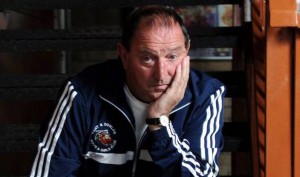 A BRAVE British man who wrestled a shark to save children from attack in Australia has been sacked – because he was on sick leave at the time.

Charity worker Paul Marshallsea, 62, won worldwide praise after he grabbed the 6ft fish as it homed in on youngsters playing in the surf.

But he was left paying the price for his courage when he returned to the UK to find his actions had cost him his job.

Grandfather Paul and his wife Wendy, 56, had both taken extended leave from a children’s charity because they had work-related stress.

Now they are facing life on the dole in Merthyr Tydfil, South Wales, an unemployment blackspot.

Paul said: “What am I going to do now? There’s not much call for shark-wrestlers in Merthyr Tydfil.”

The couple went to Australia to visit friends and recuperate with a sunshine break.

But charity trustees at the Pant and Dowlais Boys and Girls Club, where both worked for 10 years, took action after seeing TV film of Paul dragging the shark away by its tail.

It had been poised to strike off Bulcock Beach on Queensland’s Sunshine Coast. A TV crew filming nearby captured footage of Paul as he waded into the shallows. The whaler shark nearly took his leg off before he managed to steer it into deep water.

Despite Paul being hailed a hero by Australian lifeguards, he and Wendy arrived home to find a letter from charity bosses, dismissing them with immediate effect.

It said: “Whilst unfit to work, you were well enough to travel to Australia and, according to recent news footage, you grabbed a shark by the tail.

“The breakdown of confidence and trust in you is so great that we find dismissal is the only course of action.”

Father-of-three Paul, who was the charity’s project co-ordinator, said: “If I hadn’t gone in to save the kids on that beach that day my wife and I would still have jobs.

“You’d think they would have patted me on the back. To sack us both without any sort of discussions first is just disgusting.” Paul has won awards for his charity work and met Prince Charles.

But he said the charity became so successful that he and Wendy, a senior youth worker, were working seven days a week and “burned out”.

He added: “The stress of running this, it’s like a monster. It grew so big.

“Our doctor advised us to go on holiday so we stayed with friends in Australia.” Club trustees were unavailable for comment yesterday. 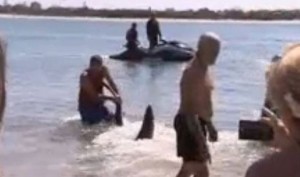