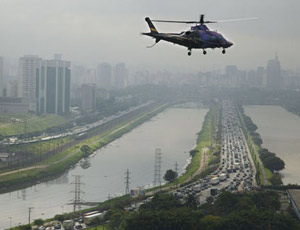 Former model-turned-business mogul Cozete Gomes owns eight companies and does not really have time to be stuck in Sao Paulo’s epic traffic jams. So she just flies over them.

In Brazil’s sprawling business capital, home to 20 million people, millionaires sick of nightmarish bottlenecks on the roads are taking to the skies, relying on a massive fleet of private helicopters to get around town.

“For me, the helicopter is a necessary tool,” Gomes said as her chopper flew high above the city’s clogged streets into Campos de Jordao, northeast of Sao Paulo – a mountain resort for the rich dubbed the “Brazilian Switzerland”.

“I use it in my day-to-day activities, for my business, my meetings. It makes my life a whole lot easier,” she said during the 50-minute ride earlier this month in a private six-seat helicopter.

There are 420 helicopters registered in Sao Paulo – a total second only to New York, according to the Brazilian Association of Helicopter Pilots.

With a net worth estimated at $125 million, the multi-millionaire Gomes, 41, is part of a select group of Sao Paulo’s super-rich elite who either own helicopters or can afford to rent them for $1,300 an hour.

There are up to 500 helicopter flights daily in Sao Paulo and the city has a staggering 193 heliports. Helicicade, the city’s largest, boasts nearly 80 helicopters owned either by individuals or private companies.

“The helicopter business in Brazil has been growing about 20 per cent in recent years,” said Carolina Denardi, a spokeswoman for the Brazilian Association of Helicopter Pilots, known by its acronym ABRAPHE.

The country has a nationwide fleet of more than 1,900 helicopters, including nearly 700 in Sao Paulo state alone, the association said. On average, more than 300 operator licenses have been issued annually over the past three years.

While most Sao Paulo residents struggle to get around the city, wealthy executives and socialites – oblivious to the maddening gridlock – cruise overhead, hopping to their luxury condos, beach resorts or business meetings.

According to Wealth Report 2013 published by Wealth-X, a Singapore-based wealth intelligence firm, Sao Paulo was last year home to 1,880 individuals with net assets of $30 million or more.

The number is projected to shoot up to 4,556 in 2022, a reflection of resource-rich Brazil’s soaring prosperity. 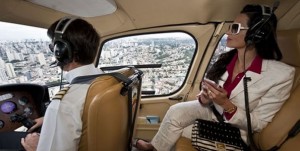 Gomes – a former model and beauty queen whose eight companies focus on promotional marketing, event management and modeling – says she is one of the few Brazilian women to have built her fortune on her own.

She shot to national fame in January with her television appearance on the “Rich Women” reality show, which spotlights the extravagant lifestyle of “travel, luxury cars, jewels, shopping and lots of champagne” enjoyed by Brazil’s expanding millionaire class.

“I agreed to appear on the show to share my success, my life story with the whole of Brazil, to show the positive experience of a women who started from nothing and built her own business,” she told AFP.

“There are many other Brazilians who are richer than I,” Gomes noted, as she nonchalantly sipped a glass of champagne at the luxurious La Villette guest house, which has its own helipad.

Indeed, the Wealth-X report identified 50 Brazilians with net assets of over $1 billion.

According to Forbes Magazine, the richest Brazilian is 73-year-old beer magnate Jorge Paulo Lemann with a net worth of $17.8 billion, followed by 74-year-old banker Joseph Safra with $15.9 billion.

The richest Brazilian woman is 83-year-old Maria Helena de Moraes, with a net worth of $6.2 billion tied to her 25 percent stake in the family-controlled Votorantim Group, Brazil’s largest cement maker and one of Latin America’s largest industrial conglomerates, Forbes says. [AFP]