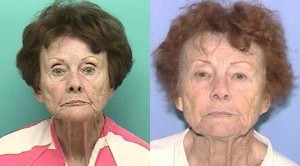 An 84-year-old woman jailed on a theft charge is now accused of trying to hire a hit man to kill one Houston-area prosecutor and maim his boss.

Ligon says Canfield faces charges of solicitation of capital murder and solicitation to commit aggravated assault. She was being held in jail in Conroe, 30 miles north of Houston, on a property theft charge.

Online jail records don’t yet list an attorney for the elderly woman.

UPDATE  Dorothy Canfield (pictured) has quite the rap sheet: After reportedly going to prison for two years in 2009 for felony theft, she was sent to jail yet again for reportedly scheming illegal immigrants out of their money to the tune of $50,000. Canfield reportedly pretended that she would help them fill out Homeland Security forms only to steal the money without fulfilling her end of the deal, according to KHOU. She was later discovered in an undercover sting.