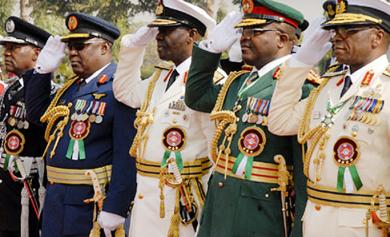 The military authorities are expected to present a common report and recommendations to the panel set up under the auspices of the National Security Adviser (NSA), Col. Sambo Dasuki (rtd), last week where they would endorse amnesty for Boko Haram but insist on retaining soldiers on the streets of the volatile states.

It would be recalled that last week, President Goodluck Jonathan mandated the NSA to set up a panel to study the possibility or otherwise of granting amnesty to the Boko Haram sect whose members have been terrorising some states in the north.

Following government’s latest decision, the chief of defence staff, Admiral Ola Sa’ad Ibrahim, last Tuesday, met with all the service chiefs where they deliberated on the proposed amnesty for the Boko Haram sect members.

The meeting, which lasted several hours according to military sources, reportedly reviewed what transpired at the Security Council meeting. Each of the service chiefs was said to have presented his position before all were merged for onward transmission to the NSA panel as a memo.

Faulting the call for the withdrawal of soldiers from the streets, another source disclosed that the service chiefs, in their report, stated that the soldiers should remain there as long as the bombings persist.