No fewer than seven people were killed and many others injured on Friday in Awka, the Anambra State capital when a tanker loaded with palm kernel oil lost control and rammed into several commercial buses. 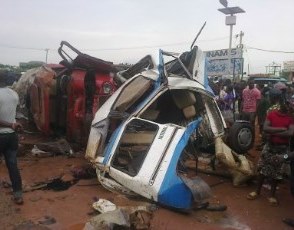 The buses were being loaded under the pedestrian bridge at the UNIZIK Junction on the Onitsha-Enugu Expressway.

The driver of the tanker could not be found as some eyewitnesses said he jumped off the moving tanker before the accident occurred.

But the Anambra State Sector Commander of the Federal Road Safety Corps, Mr. Hyginus Omeje, told Saturday PUNCH that his men counted five adult male at the accident spot, while 17 other people were critically injured.

Some witnesses at the scene said one woman, known around to be a hawker of petty goods, was also killed in the accident. The victims were taken to the Regina Caeli Hospital, Awka.

Omeje said one of the victims, whose condition was very critical, was rushed to Nnamdi Azikiwe University Teaching Hospital, Nnewi for attention. He said five commercial buses, in addition to the tanker that was heading to Onitsha from Enugu, were involved in the accident. The buses under the bridge usually pick passengers travelling to Onitsha.

He said inasmuch as the accident was unfortunate and sad, it had given credence to the campaign of the FRSC against buses loading under the bridge and people hawking goods around the busy pedestrian bridge.

“We are renewing our appeal to people not to pick passengers under the bridge or engage in hawking around the place. People need to be careful about how they expose themselves to danger,” he said.