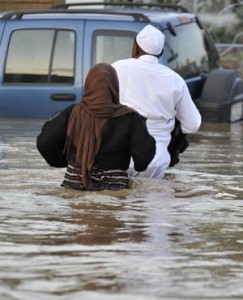 The interior minister of Saudi Arabia has requested civil defence authorities to coordinate their efforts to assist the country overcome an unusual downpour that has caused heavy damages.

Prince Mohammad Bin Nayef Al Saud, victims should be provided with services and shelters without delays to minimize the effects of two days of rain over the kingdom that has caused hundreds of accidents and left several people homeless.

“The minister who is closely monitoring the situation has directed Civil Defence Committees in all regions of the Kingdom of Saudi Arabia to coordinate efforts to provide assistance and urgent services to people affected by rains and floods which the Kingdom is currently experiencing and are expected to continue through this week,” Abdullah Bin Tahbet Al Orabi, the spokesman for the civil defence, said, quoted by the Saudi Press Agency on Sunday.

The civil defence should ensure the highest levels of readiness to provide services and hope and deal with any damages caused by the rains.

Several schools and colleges were shut down in several areas of the vast kingdom as a result of the heavy rains which meteorologists said could increase in the coming weeks.