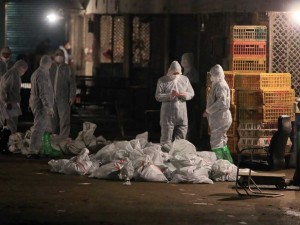 A second Chinese city has culled birds to prevent the spread of H7N9 avian influenza, which has killed six people in the country, as Shanghai’s live poultry markets remained shut.

The health ministry said on Saturday that since announcing a week ago, the virus had been found in humans for the first time.

The human infections have been confined to eastern China, with Shanghai recording eight cases, including four deaths, and two other fatalities have been reported in the neighbouring province of Zhejiang.

One of the Zhejiang cases ate quail bought at a market in the city of Hangzhou, at which authorities began culling birds on Saturday after finding quail infected with H7N9, the official Xinhua news agency said.

“People are worried,” said Yan Zhicheng, a retired factory manager who like many elderly people makes a daily trip to market.

“Shanghai people eat a lot of duck and chicken. Now we can’t touch them.”

Shanghai had culled more than 20,500 birds at an agricultural market in a western suburb by Friday, after the virus was found in pigeons, and the government announced a ban on live poultry trading and markets.

Eggs however remained on sale, as well as fresh and frozen poultry meat, as officials encouraged people to cook them well.

Chinese authorities maintain there is no evidence of human-to-human transmission, a conclusion echoed by the World Health Organization (WHO).

According to state media, the government had sought to improve transparency on the disease after being accused of covering up the 2003 outbreak of Severe Acute Respiratory Syndrome (SARS), which killed about 800 people globally.

“The government’s response … is completely different from 10 years ago, when information disclosure systems were not established,” Wang Yukai of the Chinese Academy of Governance told Xinhua.

But some of China’s outspoken Internet users remained sceptical of government assurances.

“Get out of here. If it is not infectious then what are you doing shutting live poultry markets?” said Huang Kekedou in a microblog posting.

The US Centers for Disease Control and Prevention on Friday warned of the potential risk should the virus mutate.

“This is a ‘novel’ (non-human) virus and therefore has the potential to cause a pandemic if it were to change to become easily and sustainably spread from person-to-person,” it said in a statement, adding that it has not happened.

The US government on Friday advised American citizens living in China of the cases but said no travel or trade restrictions would be applied to the country based on the current situation.