Home National News Odd News Shocking: Woman Delivers a ‘Stone Baby’ After 60 Year Pregnancy
Facebook
Twitter
WhatsApp
Huang Yijun, aged 92, is from southern China and she recently made news after delivering a baby known as a lithopedion, aka ‘Stone Baby’. 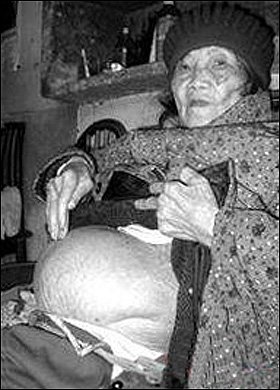 Huang Yijun told the press she didn’t have the money to have her fetus removed after doctors told her it had died inside her in 1948.
So she simply did nothing at all about it.
Lithopedion is a very rare medical phenomenon, which occurs when a pregnancy fails and the fetus actually calcifies while still in the mother’s body.

Medically speaking, what often happens is the implanted fetus gets to an advanced stage before it dies. Too large to be absorbed by the body, the remains of the child or its surrounding amniotic sac slowly calcify, turning to stone as a way to protect the woman’s body from infection from the decomposing tissue.
If no complications occur, believe it or not, the mother can basically just go on with her life.
According to the Journal of the Royal Society of Medicine, only 290 cases of lithopedions have ever been documented by medical literature.
AdvertisementClick Here To Join The 10,000 Naira Giveaway For 100 People!