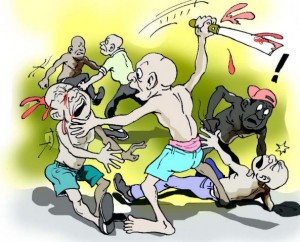 Several lives have been lost in the area in the last two weeks and property worth millions of naira lost following violent clash in the disputed area.

The deafening sound of gunfire was said to have frightened those residing close to the borders making them to relocate upland as hostilities resumed on Thursday.

Meanwhile, the people of Aguleri in Anambra East told reporters that two of their kinsmen who have been missing since the renewed fracas a fortnight ago, have been confirmed dead.

According to Aguleri people, their kinsmen namely Obalum Udealor and Onyeka Nnebe, who were abducted when the people of Ibaji first invaded Aguleri Otu two weeks ago, have been confirmed dead.

“When they came to attack our people yesterday, they were telling us that they have eaten our brothers and this is heightening the tension in the area,” they said.