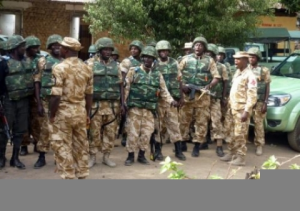 The clash was triggered by an arrest of a suspected militant by the security operatives Thursday who confessed to the plot and led the operatives to the residence of other gang members.

Speaking to newsmen, JTF spokesman in the city, Captain Ikediche Iweha stated that, “this morning operation was a product of intelligence report obtained from a suspect we apprehended yesterday that voluntarily confessed to a plot to violently attack Kanti Kwari textile market for money to bankroll impending operations in Yobe”.

“We deployed our men to the neighbourhood of the marked building and immediately cordoned off the vicinity and launched an offensive to capture the occupants of the marked building but unfortunately, our men came under fire and in the ensuing encounter, we lost a soldier, while six terrorists lost their lives.”

The slain soldier was said to be from the 3rd Brigade of the Nigerian Army, Kano.

Security sources said some of the GSM sim cards used by the dead terrorists were recovered from the private parts of the women rescued in the course of the combat.

Items recovered from the building are 2 AK 47 assault rifles, 39 rounds of ammunition, 4-round magazines, GSM sim cards and identifiable weapons of war.

The marked building was brought down by military bulldozer, while security operatives have launched a search for the owner of the property.