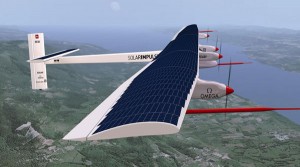 The first crossing of the United States by a solar-powered plane is expected to start in just over a month, its creators said on Thursday, as they make final preparations for an attempt two years from now at the first round-the-world flight without any fuel.

Swiss pilot Bertrand Piccard and project co-founder and pilot Andre Borschberg, whose Solar Impulse made its first intercontinental flight from Spain to Morocco last June, aim for their plane to take off from near San Francisco in early May and land at New York’s John F. Kennedy airport about two months later.

With the wingspan of a jumbo jet and weighing the same as a small car, the Solar Impulse is just a test model for the team as they build a new aircraft they hope will circumnavigate the globe in 2015.

The project which began in 2003 with a 10-year budget of 90 million euros ($112 million) has involved engineers from Swiss lift maker Schindler and research aid from Belgian chemicals group Solvay — backers who want to test new materials and technologies while also gaining brand recognition.

Unveiling the current plane at a news conference at Moffett Field on San Francisco Bay, Borschberg highlighted the cramped conditions of the cockpit in the Solar Impulse.

“That’s a bad economy seat – you would not fly on this airline,” he joked. “The next one should be good business class.”

While the current plane was set up for 24-hour flights, the next one would have to allow for up to five days and five nights of flying by one pilot – a feat never yet accomplished. 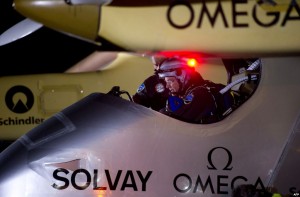 Meditation and hypnosis were part of the training for the pilots as they prepare to fly on very little sleep, Borschberg said, adding that some sort of autopilot system would have to be built on the next plane to allow for some rest.

The plane runs on about the same power as a motor scooter, he explained, powered by 12,000 solar cells built into the wing that simultaneously recharge the batteries – with storage equivalent to that of a Tesla electric car.

The plane has already flown a 26-hour flight, back in 2010, to prove continuous flight was possible with charging taking place in the day and battery power working at night.

Piccard, asked about the downside of solar-powered flight, agreed that there is a price paid for the small carrying capacity and massive wings.

“In that sense, it is not the easiest way to fly,” he said. “But it is the most fabulous way to fly, because the more you fly, the more energy you have on board.”

The first stop for the Solar Impulse as it crosses the United States will be Phoenix, followed by Dallas and then one of three cities: Atlanta, Nashville or St. Louis. It will then stop outside Washington D.C. before heading on to New York.

“It carries one pilot and zero passengers, but it carries a lot of messages,” Piccard said. “We want to inspire as many people as possible to have that same spirit: to dare, to innovate, to invent.”

Piccard has a pioneering legacy to maintain. His grandfather helped his father, Jacques, build a revolutionary submarine that Jacques co-piloted on the deepest-ever dive. Bertrand said he believes the basic idea behind this spirit is to find out what you deeply believe, and then try the opposite.

“Innovation is not about new ideas, it’s about getting rid of old ideas.” [Reuters]