Northern leaders, yesterday, frowned at what they described as a desperate attempt by President Goodluck Jonathan and his administration to blame the rising wave of insecurity in the north on the leaders. 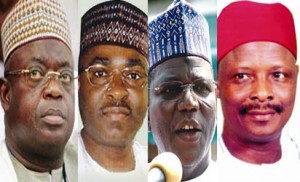 The grouse of the northern leaders was that whereas the President had earlier claimed that he could not offer amnesty to Boko Haram members as they were ghosts, he went ahead to call on Northern elders to enjoin Boko Haram to stop bombings in the country.The leaders vowed to resist any attempt by the Presidency to use the Boko Haram onslaught to blackmail them instead of taking proactive measures to nib the insurgence in the bud.

A member of the Northern Elders Forum, Dr. Junaid Mohammed and National President of the Arewa Consultative Forum, Alhaji Yerima Shettima, who spoke separately to Vanguard described the action of the government as a deliberate attempt to blackmail and provoke the north.

It will be recalled that during a visit to Borno State last month, Jonathan had rejected calls for amnesty to Boko Haram members, saying that he could not be dealing with those he described as ‘’ghosts”.

Last week, the Senior Special Assistant to the President on Public Affairs, Doyin Okupe, issued a statement, calling on the Northern elders to prevail on the sect to down tools and accept dialogue as the Niger Delta militants did before the late Yar ‘Ádua offered them pardon.

Okupe said: “There is no need for over-politicization of the demand for amnesty, or to blackmail the President for taking strong, patriotic views that are contrary to those of some of our respected elders.

“The true expectation is that our respected leaders will go back to the drawing board and increase consultation and networking with the aim of reaching out to the leadership of the insurgents and convincing them to do the needful and step out to be counted.”

Mohammed, a second Republic politician and leader of the ACF vilified the President for refusing to grant amnesty to the sect members, saying that what was good for one part of the country was also good for the other.

Mohammed noted that the President had failed to use his position as the President and Commander-in-Chief of the armed forces to find an answer to rising insecurity that has led to the killing of innocent men, women and children in the north despite the avalanche of security apparatus and intelligence at his disposal.

The ACF leader, Yerima Shettima, on the other hand, told Vanguard that the north took serious exception to the attempt by the Presidency to associate its leaders with the Boko Haram sect.

Shettima noted, “We don’t control Boko Haram and have no way of knowing what they are doing and what they want. It is the President who once declared that there were Boko Haram members even in his government.

“Having made that public declaration before the world, it is baffling why the President has found it difficult to deal with such members in his government but has continued to make contradictory statements almost on a daily basis, trying to rope in northern elders”.

“We therefore, plead with the President to leave northern elders out of the Boko Haram issues and devise realistic ways of solving the problem of insurgency in the country, one of them being, the carrot and stick approach, so as to give peace a chance to reign in the land.