Home Metro News Tambuwal’s Warning on Granting of Pardons to Those Involved in Corruption and...
Facebook
Twitter
WhatsApp 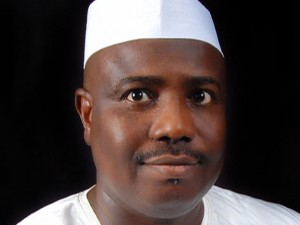 Speaker of the House of Representatives, Honorable Aminu Tambuwal has cautioned “state actors’’ not to misapply the law in granting pardons to persons involved in corruption and security related cases.

Honorable Tambuwal gave the advice at the opening of a two-day national conference on corruption and national security in Nigeria organised by the Institute for Anti-Corruption Studies, University of Abuja. He said that for the nation to succeed in the fight against corruption “state actors’’ must have a “better understanding of the law’’.

According to him, “A situation whereby you misapply the law even to grant pardon or whatever it is, we need to really look at that… Because if you don’t understand the law you may tend to misapply the law… So there is the need for us at the high places to increase our capacity of understanding our legal system… And the laws that relate to issues of security and fight against corruption for us to apply them in the best interest of the citizenry.’’

The lawmaker described corruption and insecurity as key challenges facing the nation, and he regretted that government agencies working in these sectors had faced serious budget cuts in recent years: “There is the need for the government to properly fund the security agencies for them to have proper training to face the challenges of insecurity especially terrorism, which is a new phenomenon around here… There is also the need for our anti-corruption agencies not only to be independent in paper but also to have adequate funding and the requisite financial muscle to face the uphill task in the fight against corruption.’’