Home National News Odd News Teacher, Victim Of A Bet Between 5 Students To See Who Could...
Facebook
Twitter
WhatsApp 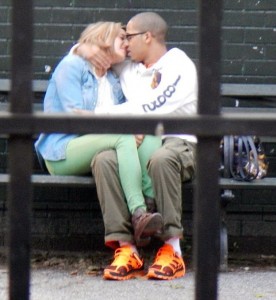 A Manhattan teacher who was covertly photographed smooching one of her students on a public park bench last year had exchanged 1,400 texts with him over 11 days, city investigators found.

Their thumb-numbing flurry of text messages, which officials declined to provide or characterize, culminated in a 30-minute public canoodling session that Arty’s classmates managed to capture in digital form.

K-I-S-S-I-N-G: Teach caught in extracurricular activities with pupil.
The teens were so sly, they got passing tourists to take the photos, in order to make sure the teacher and her pet wouldn’t recognize them and get spooked.

The investigative report revealed that the puckering pair had initiated phone contact as early as October 29, 2011, and stayed in touch on and off until the public make-out session in late May 2012.

After The Post broke the story last year, Arty’s friends revealed that he had made the moves on the popular teacher as part of a $400 bet with classmates to see who could hook up with her first.

Yet fellow classmates said the duo also had an obvious romantic energy.

“The way they act together…When he walks into the room, her face lights up,” Maia Torruella, a sophomore, said at the time. “And when he’s gone, she’s boring. You can tell he’s still on her mind.”

Despite telling friends he had developed feelings for “Shorty,” Arty publicly insisted that the woman in the photo wasn’t Warning.

When questioned by city investigators, he also privately copped to kissing the teacher in Bleecker Playground — but insisted it had been a “one-time occurrence,” the investigative report says.

Arty got “uncooperative” after that and refused to say anything further.

Warning and her lawyer also met with investigators, but other than providing basic background information, she “declined to answer any questions about the matter,” the probe shows.

There was no criminal investigation because Warning’s boy toy was above the legal age of consent at the time.

The Department of Education was able to dismiss the novice teacher with relative ease because she was untenured.

Warning was appointed a social studies teacher at Manhattan Theatre Lab HS only in October 2010 — and was earning less than $49,000 when she was canned.