One teen from Vero Beach, Fla., learned the hard way that it’s not against the law for moms to be annoying. 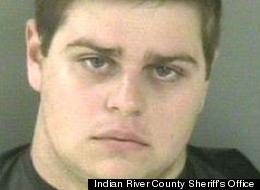 Police arrested Vincent Valvo, 19, after he allegedly called 911 twice on Thursday because “he didn’t like how his mom was talking to him.”

WTSP reported that authorities warned the teen after his first call that he shouldn’t contact 911 for non-emergencies. Apparently, the message was not received. After his second alleged call — also made to complain about his mother — police arrested Valvo outside his home. He allegedly smelled of alcohol and exhibited slow and slurred speech, according to an Indian River County Sheriff’s Office report obtained by The Smoking Gun.

Valvo was released from jail Thursday afternoon after posting $500 bond, WTSP reported. He was arrested for “abuse of 911.” According to the Sun-Sentinel, this was his third booking in the past year.

The 19-year-old’s non-emergency dial follows a string of unorthodox 911 calls. In February, a Texas woman allegedly called police to have cigarettes delivered to her home. Around the same time, a little boy in Massachusetts dialed 911 to report his mother because he didn’t want to go to bed.