Home National News Odd News The Cat in The Godfather was just a stray that lived on...
Facebook
Twitter
WhatsApp 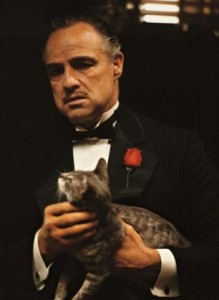 In the movie The Godfather, Don Vito Corleone, played by Marlon Brando, is the founder and mob boss of the Corleone Family. In the film’s opening scene, Don Vito Corleone is seen holding a cat on his lap while he sits in his office during his daughter’s wedding ceremony.

Francis Ford Coppola, the film’s writer and director, found the stray cat while walking through the lot at Paramount studios. Originally, the cat was not in the script at all, but right before the scene was filmed, Coppola gave the cat to Brando to see how it would play out.

Evidently, the scene was left with the cat, which ended up creating one of the more memorable images from the Godfather films. The cat did create a problem, though, because its purring muffled some of Brando’s lines, which meant they had to be looped over.

The placement of the cat is often seen as representing the hidden claws beneath The Don’s warm facade.