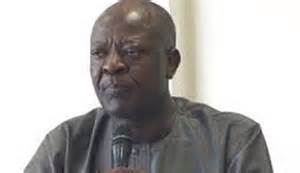 The last has not been heard on the matter between the club owners and the Nduka Irabor led League Management Committee (LMC). Elvon Jarett, who claims to be the legitimate chairman of the Nigeria Football Association (NFA), has called for the arrest of Nduka Irabor, the embattled head of the LMC.
Mr. Irabor and the Committee were sacked by club owners on Monday.
Elvon Jarett said Mr. Irabor should be arrested for fraud and impersonation. He also claimed he has taken the Nigeria Football Federation to the Economic and Financial Crimes Commission (EFCC) for receiving funds illegally from the federal government on behalf of the NFA.
Disclosing his views to journalists in Abuja, the actions of the club owners on sacking Mr. Irabor is genuine and the necessary step saying it is “in consonant with FIFA statutes because the NFF doesn’t have the right to meddle into affairs of the league.”
“There are two court orders that declare the NFF illegal. Justice Abang and Okoruwa declared them illegal and they have no right to step up any committee to run our league, we also won’t forget that the solicitor general of the country has also advised the NSC not to give funds to NFF in his letter dated June 7, 2011, to the NSC and that’s to also prove that the NFF is illegal.”
“As I speak now we have taken the NFF to EFCC and I am sure by tomorrow (Tuesday) they are supposed to be inviting them to EFCC for the funds they have been collecting since they were illegal,” Mr. Jarett said.
According to Mr. Jarett, all the actions taken by the Nigeria Football Federation, NFF, under its chairman, Aminu Maigari, were null and void since the federation itself was illegal.
“We are not saying that Maigari should go but we want them to come out and be addressed as NFA not NFF, until then I still remain the chairman of NFA so the NFF is fraudulent and illegal,” he said.