The gay couple who tied the knot in a traditional Zulu and Tswana wedding while dressed in traditional attire say they will not be fazed by the criticism being aimed at them by social network users and Zulu culture experts. 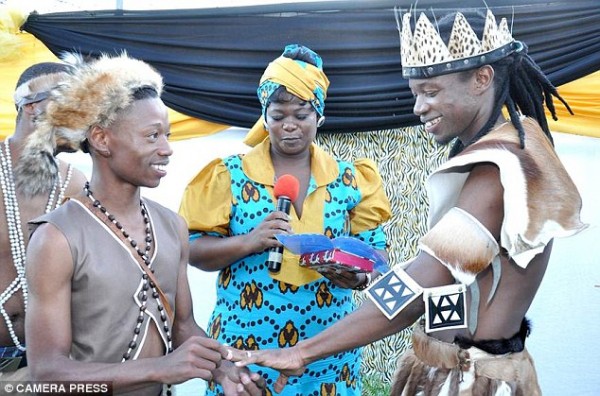 Thoba Sithole, a Zulu from KwaDukuza, and Tshepo Modisane, a Tswana from Johannesburg, tied the knot on Saturday in KwaDukuza with about 200 people, including family, friends, onlookers and the media in attendance.

Sithole and Modisane, both 27, defended their wedding and said there was nothing evil or untraditional about it.

“In the olden days there were homosexuals, but when a gay child was born the family used to slaughter an animal to plead with the ancestors to intervene and take the evil spirit away from the child.”

“However, now the constitution recognises homosexuality and gay marriages and the biggest challenge we are facing is how do we continue to call something a taboo if it is recognised by the constitution.”

He said the marriage was an insult to Zulu forefathers because marriage was traditionally a way to expand the family. Wives were expected to give birth to children who would carry their families’ names forward. Homosexuality made this impossible, said Mkhize.

However, Sithole, an IT specialist based in Johannesburg, said:

“If being gay is evil, why did God create gay people? Gays are born gay and according to a Bible scripture we were all created by God, so I don’t see anything evil about being born gay because it means that God wanted you to be gay.”

Modisane said they did not need to justify their wedding to the public because it was only between them, and to make them happy.

“We decided to have a traditional wedding because we firstly wanted to show people that being homosexual can be part of an African culture.

“Secondly, we wanted to celebrate the love we have for each other and show people that we don’t feel ashamed for the choices we have made in our lives,” said Modisane, who works as a chartered accountant in Johannesburg.

The couple said the support they had received from their families made it easier for them to tie the knot.

Sithole said his mother had always told him how she was looking forward to seeing him getting married to his partner.

They started dating in 2011 after they had been friends for some time.

Modisane said he was attracted to Sithole because he was a well-grounded man who loved God and was someone who could bring stability in his life.

Sithole said their next step after the wedding was buying a home and starting their own family. “We are fully committed to each other and we believe children form an important foundation in bringing stability in one’s life,” he said. “We will be adopting two kids – a boy and a girl – to be part of our family.”