The Ajegunle music star, who will be having his recent first major performance in Abuja at the Tyme Out with Tee-A Live Edition Concert, in an interview with MERCY MICHAEL, opened up on sundry issues: His disappearance from the music scene, career and his son’s, Ramond, music dream. The Delta State-born act also speaks on the Delta flood of October 2012. 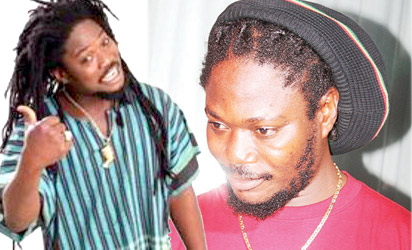 You’ve been scarce on the music scene lately. What brings you here today?

As you can see, we artistes are gathered together to deliberate on how we can help the flood victims in Delta State. Like my place Isoko in general is affected. I’m from Delta State. And you see, sometimes we ignore things. If when things become a problem that’s when we start coming together.

But why I’m happy that we are even coming together is the fact that beyond talking we are actually working out modalities on how we can help these displaced people. We as artistes, we need to learn how to use our star power to help the society and that’s what we are doing.

What has been happening to you?

I’ve been going through some things in recent time but I thank God I’ve overcome them. Some people were after my life to kill me. I could not go on stage to perform because of the fear of being shot. But I thank God that God has taken control of that. Who are they and why are they after your life? It’s a long story.

Besides, I’m not a policeman. I can’t pinpoint that this is where it is coming from but investigation is still ongoing. It all started in 2011 when two persons suspected to be hired assassins shot at me twice at close range before escaping on a motorcycle. I was on a queue to buy fuel at the Mobil petrol station along Agindigbi Road, Ikeja, when the incident happened. A guy tapped on the window of my Range Rover SUV. Thinking he was one of my fans, I wound down the glass to attend to him. He told me that I had a flat tyre.

And as soon as I alighted from the car, the young’ man pulled a gun and shot at me twice. He muttered: “No be you be this Daddy Showkey? Immediately his first shot missed me, I quickly grabbed him. As I wrestled him to the ground with the hope of retrieving the gun, a second person who was already poised to escape on his motorcycle released another bullet, this time he aimed at my head. Fortunately, he missed the mark; it was Providence that saved me from the assassins’ bullets.

Sensing that the crowd that had dispersed at the blast of the first gunshot would rally support for me, the two guys quickly scampered away on their motorcycle. Also twice last year, suspected assassins stormed my Ojodu residence. The first time they came, they succeeded in killing a close associate of mine, but their second attempt was repelled by the combined efforts of the local vigilante and men of the Nigeria Police. The matter has since been reported to the police. So, really for a long time now, you can see I’ve not been in circulation but I had to come out for this purpose because it touches me a lot to see people being displaced, stranded and nowhere to lay their heads.

They are poor people and now they are homeless. Some of them that have farms, their farms are gone. Their livelihood is gone. So that’s why we are coming together to see what we can do and that’s why I came out of my shell.

So, all the while that you were missing on the music scene, what were you doing?

Business, but it’s not something I want to talk about.

So, musically, what is the next thing for you?

Are you working on any album at the moment?

Yes, right now I’m working on a single, and immediately I’m done with that an album will follow.

Your son, Raymond, 15 years, I learnt, is showing interest in music but that he does not have your support. Why?

You see, first of all, he should concentrate on his education because let me tell you even though you want to became a musician, education is the first thing.

When I was little, I knew what my mother went through to get me to concentrate on my education but I was stubborn; I allowed music to take me away from education. Although I succeeded, but education-wise I know how it has affected me. That is why I made it as a mandate, if you want to do music, first of all concentrate on education because music is a powerful spirit, it might take him away from his education. Entertainment in general is a powerful spirit. Like me, I started entertainment when I was small but I will get my son not to make my mistake.

That is the reason. Do you think your level of education is affecting your career?

I can read and write but sometimes I feel that I should have been in this position or that position. But one thing that people don’t know also about education is that education is life; what you experience every day. I’m more educated than so many people that are graduates. But what I want for my son to understand is that there is time for everything. When I was small, I used to play truancy. I would run out of school and go and do music. My mother would come there to beat me.

I don’t want my son to go through all those things. You see music is a gift. I put it to you that I can decide not to release an album in 10 years, the day I will release one, dem no go tell una now because it is a gift. I did not learn it. Entertainment generally is not what you learn per se; it is a gift. But education is what you learn. So there is time for everything and that’s what I want my son to know. There is time to be a child and there is time to grow up and be a man. And there is time of music and there’s time for education. If I allow him right now he will lose focus. Right now, he sings in church; that, I am okay with but I make sure education is his priority for now and I will guide him to the maximum.

But your wife has been a great support to him. Does she see it differently?

Ehnnnn, my wife has been a great support to me too musically (laughs). She’s the mother of the house; she knows what’s good for everyone but I’ve told her too that she should give her support with wisdom because I know what I want for my son. When the time comes he will do music. I’m not against his dream of becoming a musician but for now education comes first and so he should concentrate hundred percent on education.

Your genre of music has not been growing. What are you doing to sustain the brand?

You see music is about style. Sometimes style changes, so you have to learn to adapt to the way it’s changing. I started music from comedy, entertaining people in my neighbourhood. And my song, when I started, I was trying to differentiate the mainstream reggae music from what I do. I can sing, I can rap but I decided to build something my people can identify with. So I came up with singing in broken English. But to your question, there are people that emulate you; if they cannot meet up with what you are doing they are bound to leave. But Ajegunle music cannot fade away because it’s music from the street.

As a pioneer of Ajegunle music, do you think you have been encouraging artistes who do that style of music enough?

Yes, people look up to me. But truth is I have had my issues too for sometime but I thank God those issues are being taken care of. A lot will be coming out from Ajegunle soon. Don’t worry, just watch out. Are you going to ever cut your dreadlock? Don’t ask me that one. I no fit tire for dis dreadlocks. The dreadlocks is my image and I don’t want to cut it.

You are so big now. What have you been doing to yourself? Na so you be before?

First of all I used to be muscle, but now I have a lot on my head. But before I drop my next album I will work it out. Are you having any collaboration on your forth-coming album? Everything about my forth-coming album I have decided to keep close to my heart. You were among the artistes that campaigned for President Jonathan.

At the last rally in Ojota you said you regretted campaigning for him; how would you balance that?

First of all a president is elected by the people. Sometimes, your decisions might not favour the people but I stand on the side of the people when it comes to that subsidy removal. Sometimes, the problem we have in our country is that when we want to take decision we don’t consider people’s plight. We go ahead and take decision without debating it.

That time they did what was wrong. I have no regret campaigning for Jonathan. I would be honest with you but I have a right to my feeling. If I feel the decision that they are taking is wrong I have the right to come and say it. And that is why I made that statement because if people that elected you into office say they don’t want something, first of all, you consider their feelings then come back and now let them know the reason why it has to be the way you have suggested it.

Trust me, Nigerians will tell you to go ahead, then you will do it. So why would I not say I regretted campaigning for him when the people that elected you have pains in them and you damned them.