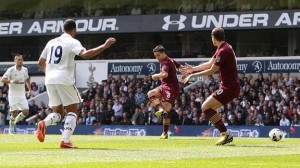 Manchester City went into this match knowing anything short of three points will endanger their title defence. But a trip to White Hart Lane always comes with its own drama and thrills.
It was a sparring start with both clubs not wanting to force the issue, Spurs looked to be in control and Gareth Bale announced his presence with a 4th minute shot from 25 yards which Joe Hart held in one attempt.
However Manchester City’s first attack produced a rare but cracking goal in the 5th minute. Carlos Tevez released James Milner along the byline and his cut- back into the box was turned home by Samir Nasri to score his second Premier League goal of the season and his first since August.
City got back into the game after the goal while Spurs seemed clueless with the ball for the next 15 minutes. Clint Dempsey slipped through Kyle Walker in the 21st minute but the full- back’s attempt at goal from tight angle was denied by the onrushing Hart.
In the 34th minute, Tottenham’s call for a spot kick after Gareth Barry handled the ball from a Dawson knockdown header was unheeded as replay showed it wasn’t deliberate but clumsy.
City ended the half on a high winning series of corners at the other half but lacked the convincing bite at goal to go two up. Tottenham had their best chance from open play in the 47 + 2 minute when a low ball finds Adebayor in the box who flicked back to Sigurdsson, but the Icelandic midfielder’s shot was blocked from close range by a defender. The half ended 1- 0 in favour of City.
City got into the second half looking to continue their impressive start of the first half, both teams struggled to keep the ball but City looked the more dominant.
Walker’s poor clearance from a cross in the 62nd minute found Yaya Toure who fires low and powerfully straight at Lloris. Andre Villas- Boas brought in Tom Huddlestone, Lewis Holtby and Jermaine Defoe to change the mentality of the second half.
Tottenham looked much better after the switch and in the 75th minute Spurs best move of the match finally brought them reward. Walker, instead of shooting at goal played Bale down the right, and his low cross to the back was tapped home by Clint Dempsey. Game on for Spurs who continued to press for a winner; however City remained a threat on the counter attack.
In the 79th minute Spurs went from looking timid in attack to producing a stunning comeback. Jermaine Defoe cuts inside in the penalty area to fire a cracking shot across Hart’s goal.
It wouldn’t be a Spurs’ win without a Gareth Bale’s goal, and the forward gets in on the act to run through the City defence before clipping the ball over Hart to make it 3- 1 to Spurs and got White Hart Lane rocking.

After Spur’s third goal, City looked to have fallen apart, they pressed for an equaliser- knowing well enough that a loss will mean United could lift the trophy tomorrow- but to no avail. 3- 1 the game ended, Tottenham leveling on 61 points with Chelsea who will be playing Liverpool at Anfield in a late kick- off.