Tottenham Hotspur talismanic winger, Gareth Bale will be sidelined for two weeks. The result of a scan on Friday had revealed. The Wales international injured his right ankle in the Europa League quarter final clash with FC Basel, which ended 2- 2. Spurs will be set to miss Bale for two games before his possible return on April 21ST, against Manchester City. Bale has played 38 times for the London club this season scoring 22 times. Spurs has not won a game this year in which Bale had failed to score.
Both William Galas and Aaron Lennon will be sidelined for two weeks after picking up a calf and a knee injury respectively. Both pair picked up their injury in the match against Basel on Thursday.
Spurs host Everton at White Hart lane, before travelling to Switzerland on April 11, for the second leg of the Europa League quarter- final tie. Andres Villas Boas will have to inspire side in the absence of these key players. Another Tottenham player expected to make a possible return soon is Jermaine Defoe. In their absence, Tottenham Hotspur will have to remain solid if the quest for a top four finish is to become a reality. Their Premier League fixture against Chelsea on April 14TH has been potsponed, to allow Chelsea play Manchester City in the FA Cup.
A bad landing after a challenge with David Dagen in the closing minutes of Thursday first leg clash resulted to a swollen ankle for Gareth Bale. He was immediately stretchered out of the pitch in distress, while fans and the Coach had hoped it was not going to be serious. 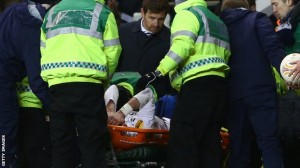