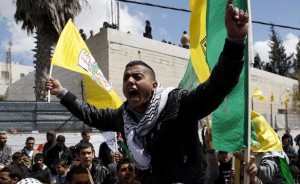 Two teenagers killed by Israeli forces as protests over death of prisoner in custody spark violent clashes in West Bank.

Israeli troops have shot dead two Palestinian youths in the occupied West Bank as confrontations entered a third day following the death of a prisoner in an Israeli jail.

Naji Balbisi, 17, and his cousin, 16-year-old Amer Nassar were shot dead in the clash at a military roadblock at Tulkarem in the north of the Palestinian territory, and their bodies were discovered early on Thursday morning, officials said.

The Israeli army who did not confirm the teenager was killed by them said troops fired on Palestinians who threw fire bombs at a guard post in the area after dark on Wednesday. The army said it was investigating the incident, which left at least one other Palestinian wounded.

Tensions have risen rapidly in the West Bank and Gaza Strip following the death on Tuesday of an inmate, Maysara Abu Hamdeya, 64, who was serving a life sentence in an Israeli jail, after he was convicted for a planned attack on a Jerusalem cafe in 2002.
Abu Hamdeya died of cancer.

Palestinians though in knowledge of the cause of his death accuse Israel of withholding care from the man and failing to release him after diagnosing that his illness was terminal. But Israel maintained it followed normal procedures.

Clashes broke out on Wednesday between Israeli forces and dozens of Palestinian protesters, as the forces fired tear gas and rubber bullets at men throwing stones and petrol bombs in the southern West Bank city of Hebron, where Abu Hamdeya is to be buried on Thursday.

Some 4,600 Palestinian prisoners declared a hunger strike for three days in protest at Abu Hamdeya’s death.