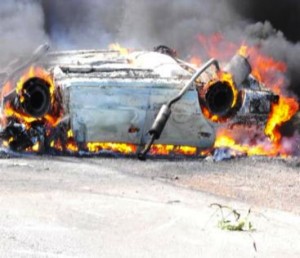 The Management of University of Benin Teaching Hospital, UBTH, has said that it will conduct a mass burial for 70 accident victims, today.

In a statement by UBTH Public Relations Officer, Mrs. Kehinde Ibitoye in Benin, Edo State, the hospital said the victims were involved in auto-crash involving a luxury bus, a fuel tanker and a trailer belonging to Dangote Group of Companies, which occurred on Friday, April 5, at Ugbogui village on the Benin-Ore expressway.

According to Ibitoye, the hospital’s management was negotiating with Oredo Local Government Area for land for the mass burial, as the corpses could not be claimed because all the victims were burnt beyond recognition.

She said the only accident victim who was brought alive to the hospital also died, noting that no passenger survived the accident.

“The management is left with no other option because the bodies are burnt beyond recognition. It is not in the interest of the hospital and its immediate environs to continue to keep such bodies,” she said.