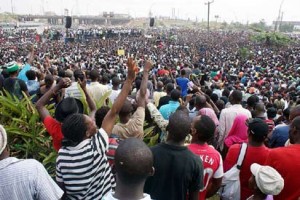 Thousands of unemployed Nigerian youths have asked the Federal Government to drop the idea of granting Amnesty to Boko Haram or risk their wrath.

The angry youths drawn from the 774 local government areas of Nigeria, did not say what the form of their action would be if the government goes ahead with its plan, but their leader who gave his name as Okey Felix Nwachukwu, warned that they would take steps to compel the government to address their plight.

The youths, who converged in Abuja, yesterday, described the attempt by the government to dialogue and settle violent groups in the country as a step in the wrong direction capable of truncating the fragile peace in the country.

Acting under the aegis of Group of Unemployed Nigerians from the 774 LGAs of the country, GUN774, the group said it was fed up with the lackadaisical attitude of the government towards the unemployed despite the huge resources accruing to the administration in recent years.

“We, the unemployed Nigerians in the 774 LGAs condemn the amnesty to the violent Boko Haram group. We ask the President to jettison the proposed amnesty and set up a broad-based committee to find ways of ending rising unemployment in the country, which has even more dangerous implications for the country.

“For us, tackling the ravaging unemployment remains the panacea for the growing poverty, restiveness and insurgency in Nigeria”.

“We want the Federal Government to declare a state of emergency on unemployment. We also demand that the government should provide social security for the unemployed and device means of creating jobs for the teeming youths in the country so as to end the deluge of violence arising from frustration,” the group stated.

Nwachukwu, who described himself as the National leader of the GUN774, pointed out that they were angry that the government tended to pay more attention to violent and destructive groups and individuals than the peaceful ones.

“We believe that the government listens more to those who cause mayhem than those who seek peace and dialogue. But government should note that there is a limit to which a group that has been pummelled by poverty and hunger can go in exercising patience,” Nwachukwu said.