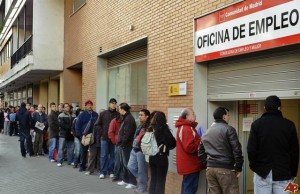 More than six million Spaniards were out of work in the first quarter of this year, raising the jobless rate in the eurozone’s fourth biggest economy to 27.2 percent from 26.02 percent in the previous quarter, the highest since records began in the 1970s.

The number of unemployed climbed by 237,400 people to 6.2 million, the National Statistics Institute said on Thursday.

Spain, once the most successful European economy, and motor of job creation in the 17-nation single currency area, is in a double dip recession, having yet to recover from the collapse of a property boom in 2008.

The collapse of a property boom driven by cheap credit has seen millions in the construction sector laid off since 2009 and private service sector, worth almost half the gross domestic product, has followed as Spaniards tightened purse strings and investment plummeted.

The Spanish economy contracted by 1.37 percent last year, the second worst yearly slump since 1970, and the government forecasts it will shrink again by between 1.0 percent and 1.5 percent this year.

Spain’s jobless rate fell to an almost 30-year low of 7.95 percent in the second quarter of 2007 at the peak of an economic boom that allowed the country to create more than half the new jobs in the euro zone between 2002 and 2005.

The jobless rate has however risen steadily every quarter since the country’s housing market collapsed, throwing millions of people out of work.

The Spanish Prime Minister Mariano Rajoy’s conservative government, which took office in December 2011 after a landslide general election victory on the back of promises to create jobs, will unveil on Friday a new package of reforms aimed at reviving economy activity.

In France, the second biggest eurozone economy, official data to be released later on Thursday are also expected to show a record number of jobless workers.

Meanwhile, Britain has avoided a so-called triple-dip recession. The economy grew by 0.3 percent in the first three months of the year.

Some analysts had feared Britain’s finances could have been dragged down by the turmoil in the Eurozone, but it continues to thrive.