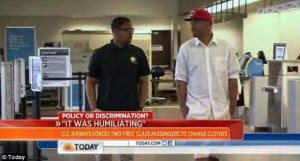 Airline U.S. Airways has been accused of refusing to let two young African American men into first class until they changed their clothes into more “appropriate attire.”

Brothers McCraig and Miles Warren are suing the airline for discrimination, claiming that when they tried to board the plane in Denver, they were repeatedly told by an employee that their outfit – jeans, hooded sweatshirts and baseball caps violated an alleged first-class dress code.

According to the federal discrimination lawsuit filed on Wednesday they were told to change into button-down shirts, dress shoes and slacks if they wanted to sit in first class and were told that was the airline’s policy.

The men went to the bathroom and changed before boarding the plane bound for Los Angeles. They were shocked however to discover two young men in first class – one Caucasian and one Filipino – wearing jeans and hooded sweatshirts.

Upon questioning the two men, the men revealed that they were “not instructed to change their clothes prior to boarding, nor at any time during the flight.”

The Warrens say they were shocked, humiliated and confused by what happened and are seeking punitive damages.

U.S Airways spokesperson Andrew Christie told AlterNet: “We welcome customers of all ethnicities and backgrounds and do not tolerate discrimination of any kind. We take these allegations seriously.

“Initial indications are that these pass-riders were traveling on non-revenue tickets as part of our employee travel program. All employees and pass-riders are expected to comply with the policies associated with this travel privilege.”