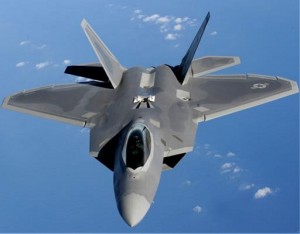 The stealth F-22 jets were sent from Japan to the Osan Air Base in South Korea amid rising tensions in the area, as North Korea announced on Saturday that it’s “entered a “state of war” against South Korea.

According to reports, South Korean President Park Geun-hye says she’s taking a potential attack from the North “very seriously,” stating: “As commander-in-chief of the armed forces, I will trust the military’s judgment on abrupt and surprise provocations by North Korea.”

Meanwhile, a statement from the U.S. military post in South Korea reads: “[North Korea] will achieve nothing by threats or provocations, which will only further isolate North Korea and undermine international efforts to ensure peace and stability in Northeast Asia.”