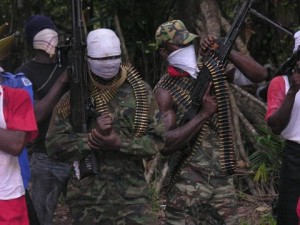 It was a case of gun battle when suspected vandals of pipeline engaged police at Ikorodu area of Lagos state. In the process, several members of the vandals sustained serious injuries while four of them were arrested at the end of it.

The suspects’ stock in trade was building their houses close to the creek and from there, they created routes by which they tap petroleum products allegedly siphoned from NNPC pipeline in the area.

Friday Ibadin, assistant Commissioner of Police in-charge of the special taskforce on pipiline, while briefing the newsmen about the arrest, said that there was an intelligence on Friday that some vandals are going to Elepete, otherwise known as Arepo, to open the valve.