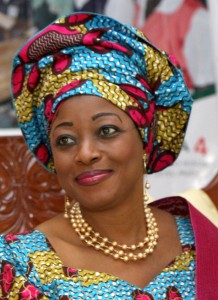 Fayemi, who paid a condolence visit to the parents of Mrs Olayinka at the Famuwagun family house, Oke Ori-Omi, where they live in Ado Ekiti, at 10am, alongside his wife, Bisi and other top government functionaries, could not hide his emotion when the 81-year-old Mrs. Adetutu Grace Famuagun kept asking “Kayode, where is Funmi?”

Governor Fayemi had declared a seven-day mourning during which all flags in the state will fly at half-mast.