Wigan are through to their first ever FA Cup final after beating Millwall 2- 0 at Wembley. 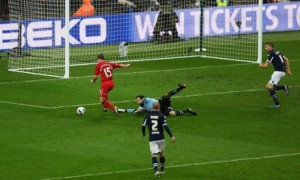 The FA Cup semi final tie between Millwall and Wigan happened to have ended with Wigan acquiring the best chances of the day. Goals from Shaun Maloney and Callum McManaman means Wigan will have to wait until tomorrow to know their next opponent for the Wembley showdown.
It is the first time Wigan will be making it to the final having also gotten into the semis for the first time. Very early in the match it was Millwall that looked more like the team of the day after Wigan failed to create purposeful chances with the ball. Their first chance came in the 5th minute from a free kick, but James Henry did little to put the ball at the back of the net.
Just as Millwall seem to be in control of the game, Wigan, the favourite team coming into this match started making the necessary efforts at goal. McManaman tried his luck from outside the area in the 14th minute for his effort to be pushed away by the Millwal goalkeeper Forde.
In the 24th minute, Kone, coming into the Millwall’s half from the right crossed from deep to Shaun Maloney who after pulling off his marker into acres of space volleys the ball down the centre of goal. The ball passed underneath Forde into the net. Malloney was able to get Wigan their first goal of the match.
Millwall’s most convincing move of the first half came in the 36th minute, but the cross from Taylor missed its target. Then a McManaman’s shot in the 41st minute flew high and wide. In the 42nd minute, Kone finds space down the left, pauses as he gets into the penalty area and then passes back to the edge of the area, where Gomez shot forced a save from Forde. Wigan had to settle for one goal as the referee signaled the end of first half.
There were no changes from both sides at the interval, as Wigan came into the second half determined to finish what they had started. In the 51st minute, McManaman cuts in from the left, taking out two defenders with a little check, but shoots over the bar from a very tight angle.
Half way into the second half, Millwall were faltering to orchestrate a better play to level- up, their best move of the second half came in the 63rd minute when Dunne pegs down the right and crosses just behind Keogh. Danny Shittu leaped three feet higher than everyone in the 64th minute, but still couldn’t reach the corner kick that came from the right side of goal. Millwall had thought they had a penalty in the 70th minute, as a cross from the right strikes a defender at a suspicious height. However, the replay proved the penalty appeal had been optimistic
While the chatters about fighting in the new Wembley stadium dragged on, on Twitter, Millwall got caught by the perfect counter attack move of the day plus some abysmal defending. Gomez stood still on the ball, no pressure from him, and waits until McManaman’s marker starts to sleep before playing a simple ball into the penalty area. McManaman went past the keeper then tapped into an empty net. Wigan had gotten the second goal in the 78th minute.
In the 80th minute, Taylors looping effort was tipped away from goal by al- Habsi. The violence at the Millwall end was later confirmed by the commentator, as the media made all effort to ignore the developing incidence. Millwall went on to end the game without any genuine shot on target; instead it was the violence at their own end that made more buzz than any genuine effort to pull a goal back. 2- 0 the game ended.