The police described the incident as “an act of revenge” on the part of the woman, a widow, after Bhola Thakur, 45, the man who was set alight, raped her. 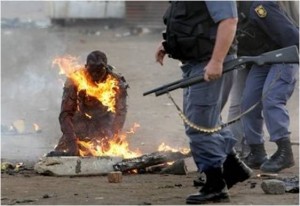 According to the police, Thakur entered the woman’s house around 1.30am Tuesday and forced himself upon her.

“Thakur was so drunk that he fell asleep in her house after committing the crime,” said an officer.

He said the woman at first contemplated self-immolation out of shame and even poured kerosene on herself.

Thereafter, she changed her mind and decided to seek revenge.

“She threw her kerosene soaked sari, which had caught fire, on Thakur and rushed out of the house. A little later, the house was reduced to ashes and Thakur was burnt to death.”

On getting information, the police rushed to the spot and took the woman into custody.

During interrogation, the woman said she extracted revenge from her rapist.