A pregnant woman was nearly killed when a woman also pregnant with her boyfriend’s child deliberately slammed into her with a car. 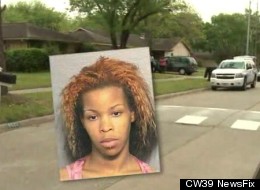 The injured woman, who is five-months pregnant, was pinned between the wall of a house and a car driven by Shareyll Hunter.

The attack was the culmination of a love triangle among Hunter, 26, her ex-boyfriend Christopher Chaney and the victim: Chaney’s new girlfriend Alise Kelley, 21.

Kelley is in the hospital with two broken legs, CW39 NewsFix reported. Her unborn child is reportedly OK, but doctors might have to amputate one or both of her legs.

Chaney, who has two children already with Hunter, said that the two women have been arguing continuously for days on end.

“They just don’t like each other. I don’t know if it’s because of me or what. I mean, I am handsome,” Chaney said, according to KTRK.

After allegedly ramming into Kelley outside Chaney’s house, police contend that Hunter drove off with her ex’s Lincoln Continental LS, KHOU reported.

She’s reportedly still on the loose.