A woman refuses to cut her manly facial hair saying she lets it natural because of her religion. 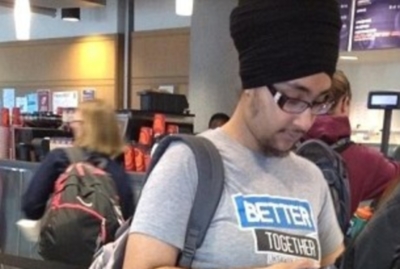 A Sikh woman, who was challenged by an Internet troll, eloquently explained why her religion expects her not to remove her unwanted facial hair. Balpreet Kaur, a student neurosurgeon, said that she does not bow to the whims of society about beauty and has no regrets about her appearance.

She explained that as part of the Five Ks Sikhs follow, one of the principles is Kesh, which asks to allowed the growth of hair naturally and not cut it. Ms. Kaur, a student at Ohio State University, explained her beliefs on a website after a Reddit user posted a picture of her on line at the airport. The man, who took the picture without her consent, put it in the funny category. “I’m not sure what to conclude from this,” he wrote.

Ms. Kaur was aware of the picture and said she is very happy with her appearance as character is more important than appearance.
Ms Kaur said: “I’m not ashamed or humiliated from the negative and positive comments, because this is who I am.

Yes, I am a baptized Sikh with facial hair. Yes, I realize that my sex is often confused and I look different than most women.
However, baptized Sikhs believe in the sanctity of the body which is a gift that has been given to us by the Divine Being, and it must kept intact as a submission to the divine.”