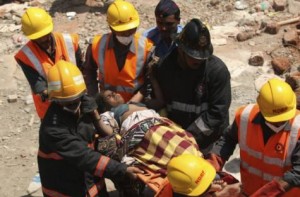 The death toll from a building under construction which collapsed in India’s financial centre Mumbai rose to 72 on Saturday, as a injured woman trapped for 36 hours was freed from the rubble of the illegal and half-constructed building.

Rescue workers searched through the rubble using cranes and bulldozers after the seven-storey building collapsed “like a pack of cards” on Thursday evening, officials and witnesses said.

A shortage of cheap homes in Asia’s third-largest economy has led to a rise in illegal construction by developers who use substandard materials and shoddy methods in order to offer rock-bottom rents to low-paid workers.

“The building collapsed like a pack of cards within three to four seconds,” said Ramlal, a local resident. “It just tilted a bit and collapsed,” he said. Residents said labourers paying rent of around $5 a day had lived in the building.

The building, which was in a forested area in the city of Thane, had been made using poor materials and without proper approvals, said Sandeep Malvi, a spokesman for licensing authority the Thane Municipal Corporation.

According to him, 72 people had been killed and 36 injured had been admitted into local hospitals. “There may still be more bodies inside,” Malvi added. “The rescue is still going on.”

As the sun rose on Saturday, around 100 workers from the national disaster relief agency continued to use jackhammers and other equipment to cut through the pile of metal and concrete.

The woman dragged from the building on Saturday was found after workers heard her voice and used camera eqiupment to pinpoint her location under the rubble. A 10-month old infant was also pulled from the debris on Friday.

The Deputy Municipal Commissioner of the area has been suspended following the collapse, which the state chief minister said was due to the building being built illegally, local media reported.

Police has grown the search for the builders who would be charged with culpable homicide in connection with the disaster.

“Unauthorised constructions are a product of unavailability of affordable housing,” said Lalit Kumar Jain, president of the Confederation of Real Estate Developers of India.

A sharp rise in property prices in densely populated Mumbai over the past five years has put housing out of reach for tens of thousands of lower earners, many of whom moved to the city in search of jobs, and who now sleep on the streets or in slums.

In 2012, India’s urban housing shortage was estimated at nearly 19 million households, according to a report by the Ministry of Housing and Urban Poverty Alleviation.