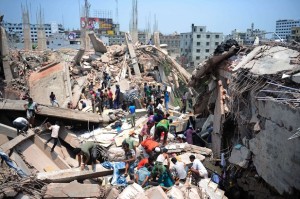 Thousands of garment factory workers have protested in the capital, Dhaka, over the death of about 200 workers in building collapse in Bangladesh, as rescuers continued to hunt for survivors, local media have reported.

The Bangladesh Garment Manufacturers and Exporters Association building office has been attacked. Workers have also blocked a road and indulged in vandalism at some places, the Daily Star newspaper reported.

The protests come a day after a garment factory collapsed killing about 200, and there are fears the death toll might go up, even as criticism mounted of foreign firms that source cheap clothes from the country. Rescuers have struggled to reach survivors.

The interior minister, Muhiuddin Khan Alamgir, had after visiting the disaster site told reporters that the building had violated construction codes and that “the culprits would be punished”.

More than 1,000 people were injured when the site housing five garment factories on the outskirts of Dhaka imploded on Wednesday, allegedly after managers ignored workers’ warnings that the building had become unstable.

Flags flew at half-mast on Thursday as the shell-shocked country declared a day of mourning for the victims of the nation’s worst factory disaster, which highlighted a new safety concerns in Bangladesh’s vital garment industry.

Workers had said a day earlier that large cracks had developed in the structure.

A clearer picture of the rescue operation would be available by the afternoon, Shikder said.

Searchers worked through the night to get through the jumbled mess of concrete with drills or their bare hands, passing water and flashlights to those pinned inside the building.

“I gave them whistles, water, torchlights. I heard them cry. We can’t leave them behind this way,” said fire official Abul Khayer.

Rescuers cut holes in the jumbled mess of concrete, passing water and torches to those pinned inside the building as rescue operations illuminated by floodlights continued through the night.

The disaster came less than five months after a factory fire killed 112 people and underscored the unsafe conditions in Bangladesh’s booming garment industry, the second biggest in the world.