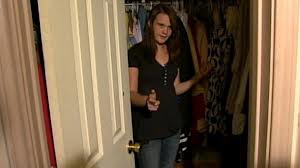 A 12-year-old girl knew what to do when a home invader broke into her home.

The sixth-grader hid in her bathroom closet, clutching a gun. When she saw the handle of the bathroom door move, the 12-year-old girl shot a hole through the door and hit the suspect in the chest.

Kendra St. Clair, who had never fired a gun, protected the Calera, Oklahoma home and herself in a real life “Home Alone” situation which featured a gun instead of booby traps on Wednesday. Kendra initially called her mother when a strange man allegedly knocked on the door and rang the door bell several times. “I called my mom. She said go get the gun and hide in the closet,” Kendra said.

She called 911 when she saw him trying to enter through the back door. Soon after, she heard the intruder inside the house. Stacey Jones, 32, had been in the house for about six minutes, while Kendra spoke with the 911 dispatcher. “I heard the bathroom light switch turn on that leads to the closet,” she said. “When I saw the doorknob turn, I fired the weapon.”

Jones was taken to a hospital in Plano, Texas, before being booked into the Bryan County Jail on Thursday. His bail was set at $250,000.