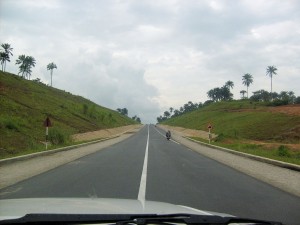 87.5 per cent of the on-going federal road projects inspected in the South-East has failed the standard tests conducted by members of the House of Representatives Committee on Works who were mainly professional engineers.

Only 12.5 per cent of the 16 federal projects inspected met the required standard as specified by the Federal Ministry of Works.

The tests conducted during the committee’s oversight visit to some on going federal road projects in Imo, Abia, Ebonyi and Enugu states, were based on job specifications as contained in the contractual agreement of the Federal Ministry of Works and various contractors.

All road projects inspected in Imo State failed the standard test, while the only road which passed the test in Abia State was executed by the Abia State Government on behalf of the Federal Government.

In Ebonyi State, the already completed drainage and thickness of the road between Abakaliki and Afikpo which is on-going passed the standard test.

In Enugu State, the drainage on the Enugu-Abakaliki road rehabilitation, under the World Bank’s Road Sector Development Team, failed the test, while the thickness of the asphalt on the completed section met the required standard.