Fourteen members of the Movement for the Actualisation of the Sovereign State of Biafra (MASSOB), who were on their way to Okwe in a chartered vehicle were yesterday arrested by soldiers at a checkpoint at Nkwoagu along Abakaliki-Afikpo Road for hoisting Biafran flag. 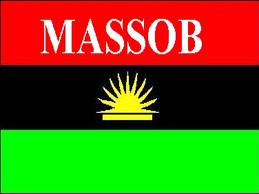 The MASSOB members were said to be en-route to Okwe Okigwe, Imo State for their national meeting before the arrest and were later moved to SCID Abakaliki. The action was, however, condemned by the organisation’s National Information Director, Mr. Uchenna Madu who described the action of the soldiers as an act of cowardice by the Nigerian Army who he said had always attacked their non-violent members with military might while shying away from the violence-prone areas including Boko Haram terrorist activities.

Madu, who expressed worry over the action, demanded for their immediate and unconditional release from and accused the security agents of pushing the organisation to the wall and creating artificial tension in Igboland. He said, “this is another ploy to heat up the polity and scuttle President Goodluck Jonathan’s administration.” He gave the names of those arrested as Osita Obiajulu, Patrick Onyiba, Ikechukwu Nweke, Pius Nwangwu, James Ovu, John Enyi, among others.