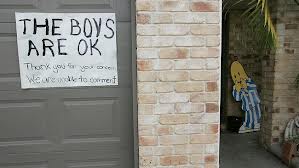 Girl served her neighbors laced brownies in plot to get revenge.

After she fought with her neighbor’s boys aged 12 and 13, earlier that day in Richlands, west of Brisbane, Australia, a 14-year-old girl made a batch of brownies and took it over to her neighbors who live across the road from her and she apologized for fighting with them.

The boys were impressed with her friendly gesture and accepted her apology. The older brother took a bite from the brownies and felt that something was not right with the it as it tasted really bad. The boy warned his younger brother not to touch the brownies, instead they took it to their mother.

The boys’ mother, who did not want to be named, said one of her sons took a bite of one of the neighbor’s brownies, before realizing something was very wrong. It had a strong smell. “He only had one bite, thank goodness, I’m just glad my younger one, didn’t touch it,” she said.

The mother called the police to report the incident. The brownies were tested and found to be laced with toxic household chemicals such as toilet and window cleaners. Police arrested and charged the 14-year-old with attempted murder, administering poison with intent to harm, and two counts of acts intended to maim. She was held at Richlands Magistrates Court overnight, before making bail.

The teenager, who cannot be identified, was represented by defense lawyer Debbie Kilroy. When questioned about her client Kilroy said the teenager was fine and holding up well.

The boy who ate the poisonous brownie is fine and did not require medical treatment.