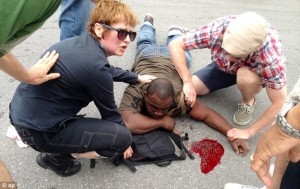 New Orleans police are on the hunt for 3 gunmen who opened fire on a crowd of people at a Mother’s Day parade in New Orleans on Sunday.

19 people were transported to local hospitals with non-life threatening injuries, according to a report on Reuters News website.

Among the wounded were ten men, seven women, and a girl and a boy, both aged 10. The victims were shot as they walked in a “2nd line” of about 300 people following behind the original parade participants.

Police who were working along the parade route observed three men running from the scene of the shooting. Spent shells were recovered from the scene, indicating the bullets were fired from two different guns.

A police spokesman said on Monday the investigation was continuing. “There’s nothing new to report,” he said.

Two victims underwent surgery and the children were grazed but in good condition, police said on Sunday. It was unclear if the victims were marching or watching the parade.

Violent crime in New Orleans ranks above the national average in FBI surveys. A poll of residents in 2010 found crime to be their greatest concern.

Share
Facebook
Twitter
WhatsApp
Previous articleTwo Girls Who Spoke To Each Other For The First Time At A Track Meet Because They Looked Alike Find Out They Are Sisters
Next articleNollywood actress Camilla Mberekpe explains how she was delivered by T.B Joshua
- Advertisement -